Bhavdeep Singh – It’s Time For Us To Listen 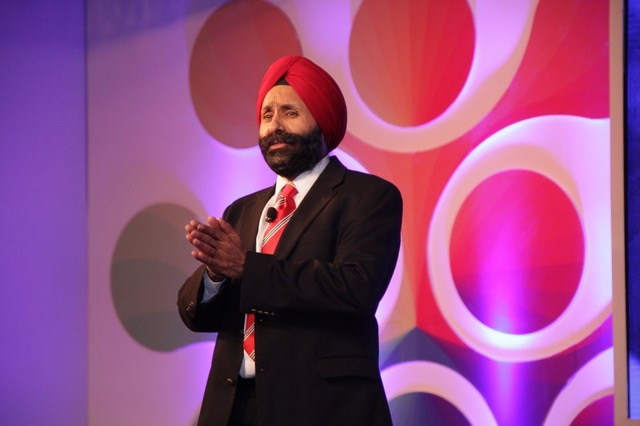 Bhavdeep Singh, Managing Director of Whitehawk Associates, recently had the opportunity to reflect on his journey as an Indian immigrant to the United States. He also weighs in on some of the events of the past twenty years that have impacted the Sikh American community.

The following are excerpts from Bhavdeep Singh’s remarks. The comments and quotations have been edited for content and clarity.

These are words that have come out of my mouth many times for many reasons. If I had a nickel for every time that happened, well, you know how that saying goes.

My family and I came to this great country in 1970 from India and settled in a suburb of New York City. My siblings and I were very young and we were about get on a ride, a fairly, wild and compelling ride. The way my parents saw it, we were much like the original settlers in this nation, only we got here a few years later.  Two years removed from the assassinations of the Rev. Martin Luther King Jr. and Robert Kennedy, the country was still feeling the challenges of the civil rights movement, and to be quite candid, it was a somewhat tense and unsettling moment in the history of our country.

I went to a fairly diverse school in White Plains, New York, and while the kids didn’t always get along, the one thing they agreed on was to beat up the little kid with the “thing on his head.” And get beat up I did – so much so, that when the 3 pm bell rang signaling the end of the school day, I used to just run out of school and get home as quickly as possible so I didn’t get in the way of some bully’s fist.  But as was sometimes the case, I often wasn’t’ fast enough.

It is worth mentioning that I did try explaining to the kids why I wore this mini turban, I tried many times to explain I was a Sikh, and I kept my hair and turban as a commitment to my religion.

I suspect no one was listening.

Over a period of time, my confidence started to build and I started to make inroads with the school kids and people in general. While I looked different, in every other way, I was like everyone else in New York. I started telling myself that I was “as red, white and blue as anyone could be with a turban on their head.”

However, while I was pretty convinced, not much had changed, because no one was listening. In the late 70’s, we didn’t have cell phones or play stations, if you wanted to have fun, you had to be outside on the playground. So, I grew up playing Little League baseball in the spring, stickball in the summer and basketball in the winter, all while watching “Happy Days” (remember the Fonz?), “Mission Impossible” (pre-Tom Cruise), “Three’s Company” and such. I was a die-hard New York Mets fan and cried when they lost to the Oakland A’s in 1973 and cried again when they beat the Boston Red Sox in the 1986 World Series.

I told anyone who would listen, “I think like an American because I am an American!”

However, once again, I’m not sure if anyone was listening.

While I came across many wonderful people who embraced diversity (before we called it that), there were harsh reminders along the way that I was indeed different — whether it was schoolyard jabs, random taunts from strangers on the street or having eggs thrown at our home during the Iran hostage crisis in 1981.

Fast forward to Sept. 11, 2001. Our country is attacked and as was the case with every other American, I was shocked about the tragic events at the World Trade Center. My reaction and the reaction of Sikhs nationwide was no different than our fellow American citizens: concern for the safety of our nation and sympathy for the families of those who died.  We embraced our neighbors and prayed for the well-being of the country and people all over the world.

Yet on Sept. 15, 2002, Balbir Singh Sodhi, a turban-wearing Sikh in Mesa, Ariz., was shot dead by a man who boasted that he wanted revenge for 9/11. Balbir Singh Sodhi had nothing to do with the attacks of 9/11 and like the rest of us, he too had immediately expressed concern for those who had died.

In retrospect, Mr. Sodhi was guilty of one thing only: He was a practicing Sikh and wore a turban.

Immediately, the Sikh community realized that we had a knowledge gap and we had to help educate those around us with respect to Sikhism. We set out to share information about the Sikh religion. To a great extent, we did achieve a bit of success whether it was the right to wear a turban in the workplace or how Sikhs were treated during security screenings at airports, or the rights of Sikhs to serve in the New York City Police Department.

Fast forward to August, 2012.  On a beautiful Sunday morning in Wisconsin, five innocent people (Sikhs) who had come to worship in peace were murdered in a local Sikh Gurudwara temple. The Sikh American community again found itself asking, “Where do we go from here?”

Over the last 10 years, we continue to make progress and the awareness level around the Sikh community has grown materially since my schoolyard experience in the 70’s and the horrible events of 2011.

We take great pride in being a part of the moral fiber of this great nation and strongly subscribe to the words and vision of our Founding Fathers. We are a peace-loving community and have a strong fundamental belief in equality and sharing. The Sikh religion, which is the fifth-largest religion in the world with almost 25 million followers, has a rich tradition of mutual respect for all.

We believe that all religions have rich histories with merit and our Gurus (prophets/teachers) were advocates of supporting our brethren from all walks of life. It is interesting that our Holy Book, Guru Granth Sahib, has writings from our Gurus and also from Muslim and Hindu scholars and poets.

Today, there are more than 500,000 Sikhs in the United States. We are business people and retailers. IT professionals, doctors, lawyers, CEOs, carpenters, police officers, scientists, educators, taxi drivers, laborers, students, and we fundamentally subscribe to the views expressed in the Constitution of the United States of America.

We fought alongside the Allied forces in World War II with valor and migrated here more than 100 years ago to help build the early railroads in the United States.  It is worth mentioning that Sikhs are now serving in the US Army and it is a fairly common sight to see Sikh Police Officers in uniform with their turbans in many major US cities.

And yet indications are that we may still not be listening and sometimes it might not be enough.

Don’t get me wrong.  Many exceptionally good and kind people have welcomed us into their lives with open arms. However, there are still many instances of bias and hate and we are working through that.  As a community, we continue to challenge ourselves on what more we can do to build the bond between our community and the rest of the country.

From the perspective of a Sikh American, we want to share, and we are an open book.  We welcome you to our homes and temples. If you see a Sikh on the street or if you work or live near a Sikh family, ask us about who we are, share with us and educate us about your faith as well. It is dialogue like this that will strengthen our bonds and truly make us one.